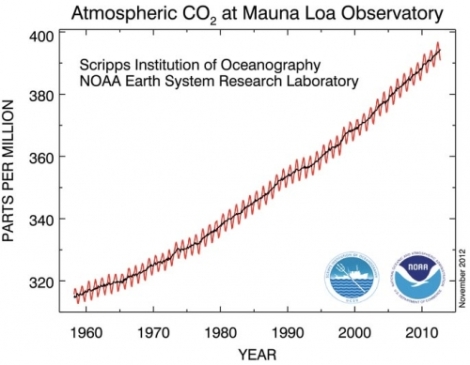 A number of disturbing climate figures have been released in the past few days and weeks: CO2 levels continue to rise, other greenhouse gas (GHG) levels are reaching record highs, and global temperatures could rise by as much as 4°C by 2060 (twice the limit recommended by scientists). But this news shouldn’t be cause for despair; instead, it should spur us into action because we still have the opportunity to mitigate these excessive increases, particularly at the climate talks happening this week in Qatar.

Last week, the World Meteorological Organization (WMO) announced that global atmospheric CO2 levels reached 390.9 parts per million (ppm) in 2011. Pre-industrial atmospheric carbon is pegged at 280 ppm, so we have seen an increase of 40% during the industrialized era. For the last 10 years, atmospheric CO2 has increased an average of 2 ppm each year! [Just a quick clarification: concentrations are different than emissions. Emissions are what gets put into the atmosphere; concentrations are what remain in the atmosphere after the interactions of the Earth’s carbon cycle.]

Rising concentrations are problematic because CO2 is considered the most important of the long-lived GHGs, categorized as “long-lived” because it can remain in the atmosphere for centuries. CO2 and other GHGs trap radiation within the Earth’s atmosphere, which causes the Earth to warm; this phenomenon is known as “radiative forcing.” According to NOAA’s Annual Greenhouse Gas Index, radiative forcing increased by 30% between 1990 and 2011 (only 21 years), and CO2 accounted for 80% of that increase. Thus, increases in CO2 concentrations are highly correlated with increases in radiative forcing and subsequent temperature increases (making last Monday’s post about the world experiencing above-average temperatures for the last 27 years much less surprising, although still discomfiting). We must stop our CO2 concentrations from rising further in order to aid efforts to keep global temperatures from rising more than 2°C.

CO2 levels aren’t all that’s on the rise – methane and nitrous oxides, two other heat-trapping gases, reached record levels in 2011 of 1813 parts per billion (ppb) and 324.2 ppb, respectively. Both of these gases contribute to radiative forcing, albeit less significantly than CO2.

As a result of these increases, average global temperatures have already risen by 1.8°F, or about 1°C, since 1900. Scientists have recommended that average global temperatures not rise by more than 2°C (3.6°F) if we wish to avoid significant climate disruption and its accompanying effects (e.g. drought, heat waves, and more extreme weather events). But, the World Bank issued a report last Sunday warning that the world’s average temperature could rise by 4°C (7.2°F) by 2060 without significant reductions in emissions.

CO2 emissions are a big part of this mandate, but they are not the only target for action. Carbon can remain in the atmosphere for centuries, but some “climate forcers” are much more short-lived, staying in the atmosphere for only a few weeks to a few years. Examples of these short-lived “climate forcers” include methane, a heat-trapping GHG, and black carbon (soot), which absorbs heat. The World Bank recommends cutting emissions of these substances as well.

Michael MacCracken of the Climate Institute agrees, asserting that reducing black carbon, methane, and tropospheric ozone (an air pollutant produced by fossil fuel combustion and also a component of smog) emissions can reduce the speed with which the planet warms. A recent assessment performed by NASA’s Goddard institute for Space Studies, the U.N. Environment Programme, and WMO predicts that aggressive cuts in emissions of these short-lived compounds could halve projected warming between now and 2050. That would be incredible progress!

MacCracken cautions that these reductions shouldn’t be cause for postponing CO2 emissions reductions because policy delays have already deferred much-needed action. But, these cuts should help us realize more immediate climate results. CO2 reductions will need more time to take effect, but reducing short-lived compound emissions can deliver results very quickly. I am hopeful that the rapid upshots of these emissions cuts will provide encouraging progress and will inspire the world to continue to take significant steps forward in reducing emissions.